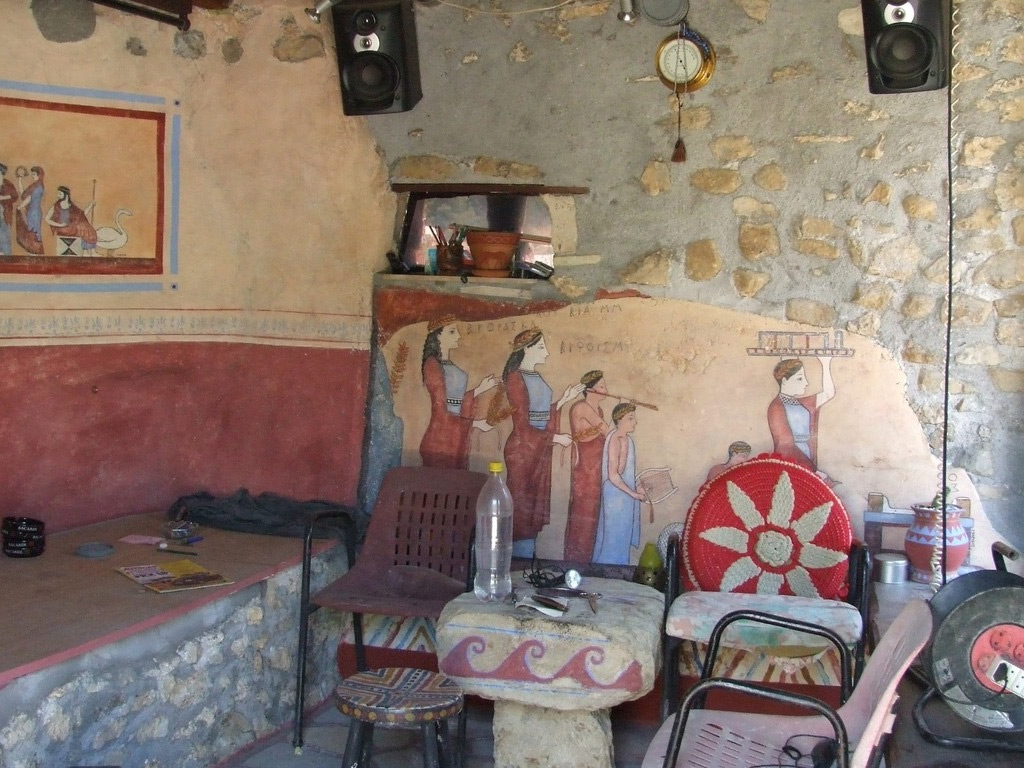 I was feeling rather down this whole week and felt an urgent need to escape Sykia, if only for a couple of hours, and give free reign to my slightly adventurous side… So I decided to go in search of the “Pitsa caves” of which I knew almost nothing, as did everyone else I questioned about them.

I heard about them at the museum of Ancient Sikyon, a small part of which is dedicated to the findings there. Apparently these caves were inhabited for some thousands of years and became in Antiquity a place of worhsip of female gods and spirits. Women would go there to give offerings hoping in exchange that they would become more fertile.

Of course I did not find the caves exactly… It was too hot to go mountaineering (plus I was alone) and I knew it, but I needed an excuse, so this one was as good as any! But I did find some interesting things nevertheless.

I set off from Sykia towards Patra on the old national road. This road is really quite beautiful as it is bordered by the sea on one side and traditional old houses on the other. It was also empty at the time I was passing by (at siesta time), which made it also a little bit surreal. I turned left towards the mountains at Lykoporia. The road is quite narrow. It passes through silent vineyards and elegant olive groves as it slowly winds up the hills. I was amazed by the views I saw just a few minutes after leaving the main road! But what was best were the scents. That trademark scent of the Greek mountainside in summer: thyme and other delicious herbs, blending together under the scorching sun, creating in the mind images of the good times long past, when happiness would be being a shepard on the breezy hills, at one with nature and the elements… 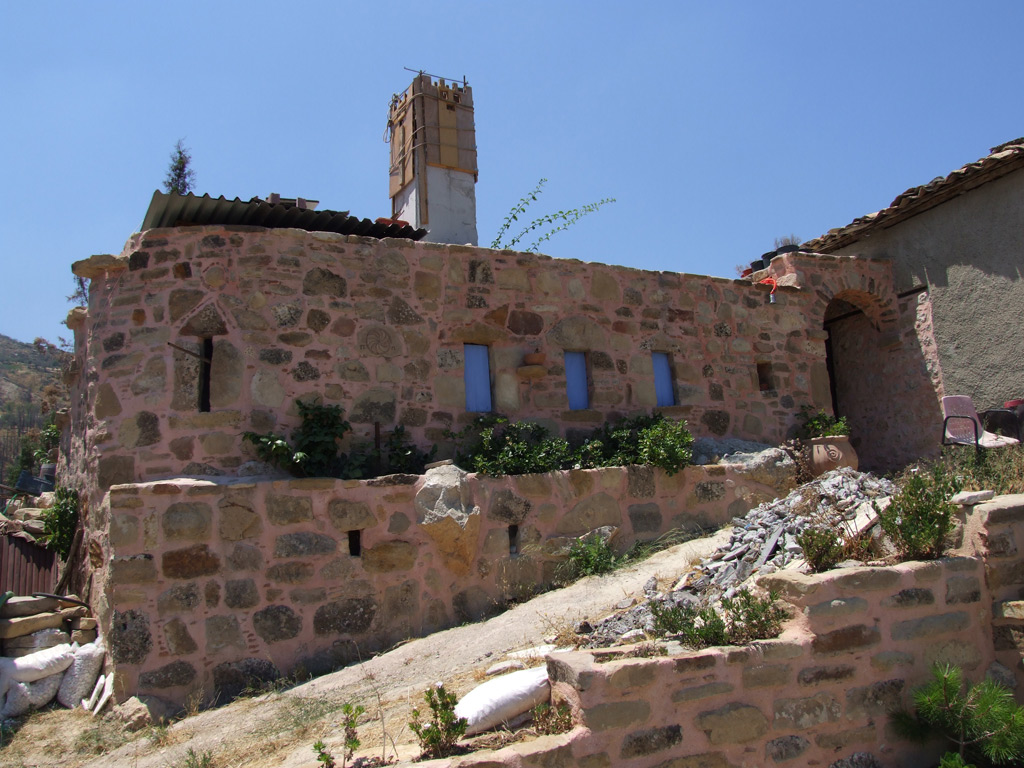 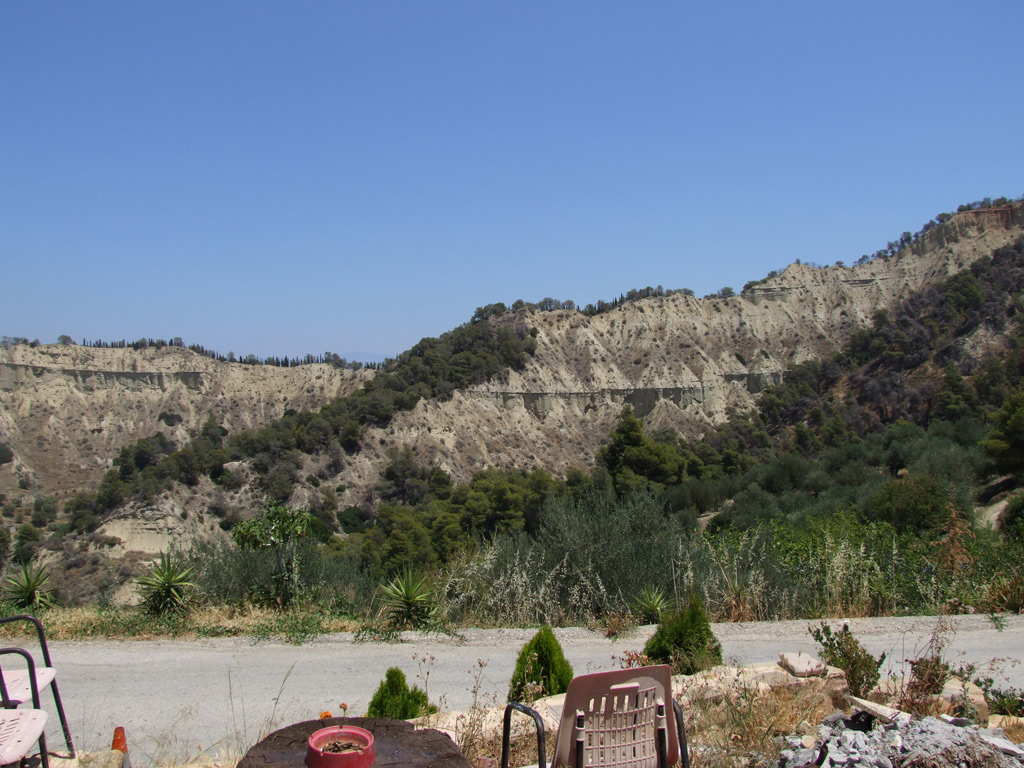 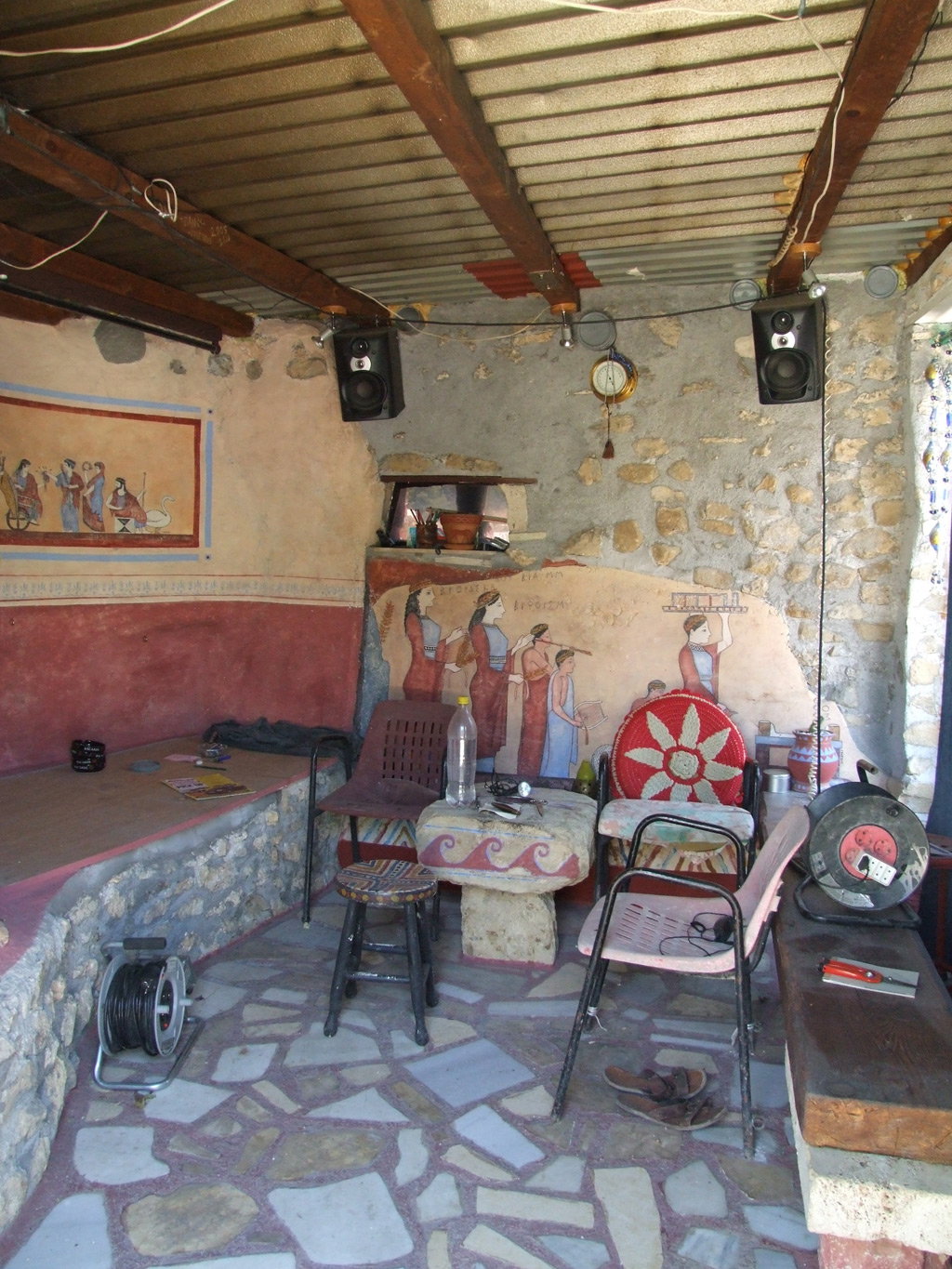 I stopped to take pictures of the strange rock formations all around me and then noticed a very well kept small house. The eldrely owner appeared at the door and I stepped out of the car to congratulate him on his good taste in architecture and ask him whether he had heard of the Pitsa Caves. It turned out that he had and he invited me inside for a glass of cold water and a chat. I was surprised to find myself on a big rock terrace overlooking the entire gorge! A monumental view, which one would have hardly guessed when looking at the entrance of the house! Most of this splendid view was unfortunately tarred by the sight of burnt trees but I am optimistic that they will soon grow back… The old man then led me to his miniscule living room, where another, even greater surprise, awaited me: a friend of his had painted on the walls frescoes imitating the paintings on the walls of the Pitsa Caves!! So, although I did not end up entering the caves themselves (and by the way, even if I have I would not have seen the original wall paintings as they have been removed to be stored in various museums…), I got to see the paintings I was after!

Which brings me to another thing that never ceases to amaze me: You have only to take the trouble of looking a little bit off the beaten track in Greece, to discover not only that proverbial Greek hospitaliy is alive and kicking, but that there is also so much magic around!

I left the old man, after having written down his phone number and having agreed that should I or any of our guests at Daphne’s Club wish to visit the caves we will call him and arrange to have him as our guide up the mountain!

I continued along my way, quite cured of any lingering depression! I looked at my map and decided to try the roundabout way of returning to Sykia. It was a success! It was a dirt road, but a fairly civilised one, so that my poor car did not suffer horribly… But the views it afforded us (me and my car!) made up for any uneasiness I might have felt at being alone on a dirt road in the middle of nowhere, with a car that is not a 4X4! Or is it that I am easily enthusiastic? I admit that when confronted with virgin Greek views I quite lose my usual coolness!

I arrived back at the hotel, full of positive energy and full of creative ideas! This diary was one them!